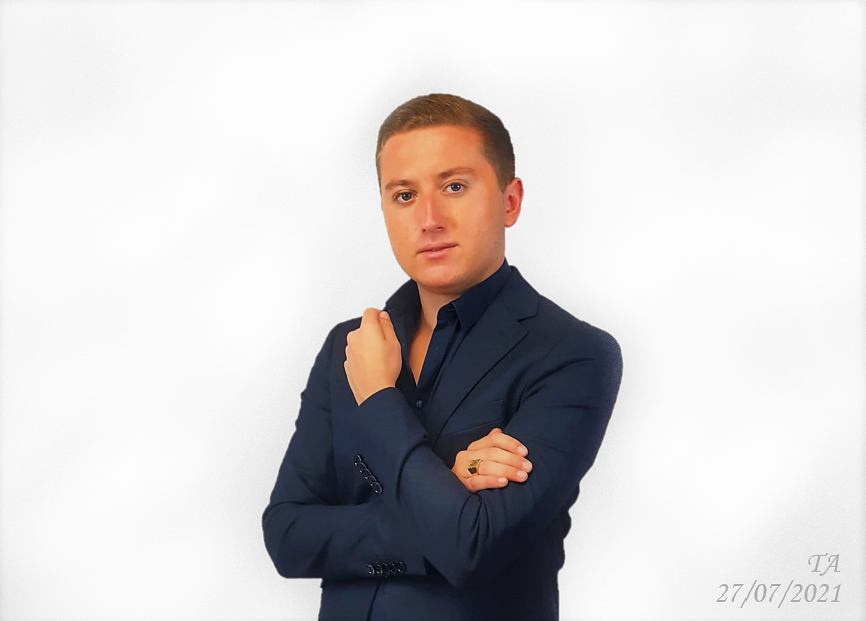 Our last economic studies have shown unexpected and fascinating conclusions. The monetary period we are living in reflects the unprecedent context of massive monetary creation with an inflation relatively low, and an unlimited market rise. Last decades demonstrate that neither monetarists theories, nor Keynesian’s theories, can rationally explain the consequences of public deficits and expansionist monetary policies. We have to frame the real issue behind velocity and understand processes which determines inflation, growth and finally inequalities.

Velocity can be defined like the speed of circulation of money, which is also an indicator for the speed of transaction’s frequencies in the economy. Indeed, Velocity is equal to the GDP divided by the monetary mass (V = GDP/M). Velocity remains a theoretical concept and is more likely to be efficient to be compare through time. The fact is that velocity is a central component of economy and is determined by monetary and economic evolutions, while it explains efficiently some fundamental mechanisms.

Velocity and cyclicity of crisis.

From our previous equation, we get the GDP by multiplying monetary mass and velocity (GDP = M x V). As a result, velocity determines economic cycles. Velocity is a component of the famous Kondratieff Cycle, with a periodicity around 50 to 55 years. The graphic below shows the velocity of monetary mass (M2) for US since 1869, according to combinate FRED data. 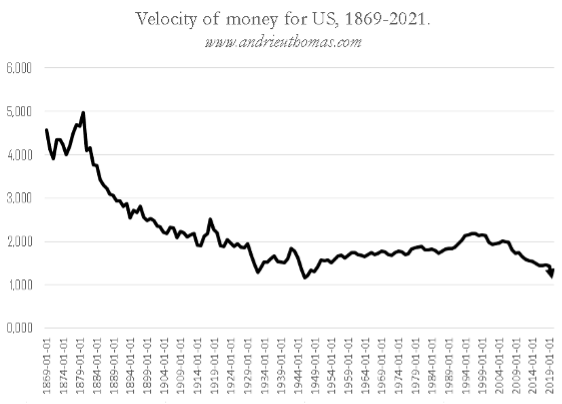 We can clearly see the Great Depression from 1873 to 1896 with a quick decline in velocity, declining of 39% over 23 years. Then velocity recovered until the stagflation crisis of 1920/1921 [see our last article on stagflations and depressions]. After this time, the Great Depression of 1929 and World War II, added to massive public spending, resulted in a last collapse of velocity. The last historical low for velocity has been achieved in 1946 at 1,16 (against 1,13 for 2020). Then, during the Thirty glorious, the GDP has risen as well as velocity, characterizing a long period of prosperity, with a rise of exchanges and production.

The historical observation, without surprise, is that velocity loose value continuously. The average decline of velocity since 1869 is around 1,35% per year. From a very theoretical point of view, a dollar velocity of zero could be achieve with this rhythm around the year 2 106 (even if velocity seems to describe a declining curve rather than a straight line). Furthermore, the average historical velocity for 2021 should be 1,15, which means we are close to the historical norm.

There is an obvious link between velocity and inflation. Indeed, inflation can be described as follow: 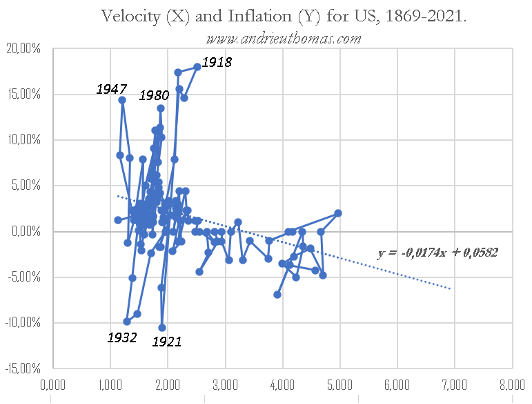 The graphic above shows the comparison between velocity (X) and Inflation (Y). We clearly see that a lower velocity implicates more volatile moves in prices. We also identify in this graphic major crisis of stagflation (1864, 1920, 1980). Each crisis of stagflation results from an acceleration of velocity, and generally, a public deficit instability (high public spending preceding). On the long-term plan, inflation compared to velocity reacts through big cyclical waves [see our article on inflationary cycles]. Instability in prices become greater as velocity decline, century after century.

Inequalities and velocity in our XXI century economy.

Recent economic history demonstrates the predominant role of velocity in general economic and financial dynamics. We are assisting to a massive acceleration of monetary creation, while velocity collapse. It results in a relative limited real inflation, and in a major rise of financial assets. Furthermore, we have to insist on the considerable responsibility of central banks and public deficits in the last trends observed.

Why markets go to the moon.

For the US, few people know the real source of inequalities. The fact is that the correlation between monetary mass and public deficits exceed 99% while the correlation between public debt and financial markets overthrow 95%. Thereby, growing money stock means, with a 98% probability, growing financial markets. The link between public debt and inequalities is diminished in countries with a high social protection, and generally a very low potential growth, because the relation money stock/public debt is affected. 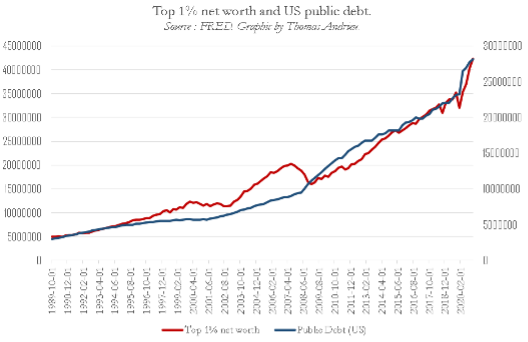 The important point today is to consider the markets as a component of our monetary context. As long as central banks create money, market risk (with a correction of more than 50% for example) is very low. In other words, the long-term trend remains unchanged as long as public budgets are not in surplus. Simply because states have always been the first source of destabilization of the price system.

The first point to consider here is the fact that the US public deficit is correlated to 80% to the average volatility since 2000. It means that the wide part of the declining volatility since 2000 is implied by monetary creation, and inevitably by public spending. Indeed, since the Great Depression of 1929 with a massive public interventionism, there is a growing link between public spending and velocity.

The other observation is that velocity has always determined the structural inflation on a long period (one to three decades especially). When a recession occurs today, reduction in velocity imply a larger public deficit, which become even greater with supplementary spending for recovery. Collapse in velocity precede of few months a massive public deficit. When the recession ends, recovery arrives and velocity stabilizes while public spending remains very high… The inevitable result is inflation, as we know it today.

The other historical observation is that a great reduction in the public deficit will result in a higher velocity, especially if the reduction is fast enough. To put it clear, velocity will also determine social stability and market implicit direction.

To conclude, we don’t see other consideration that velocity of money is a guarantee of economic stability through time. History of civilizations shows that velocity has played a major role in their own collapse. The actual necessity for a stable velocity is considerable. More than a simple economic consideration, velocity of money determines social stability through the price system. To end, a massive public spending policy, with a high structural deficit as we are noticing it in some countries, is a very dangerous perspective for the evolution of velocity and society as we know it.

By Thomas Andrieu for ROCHEGRUP 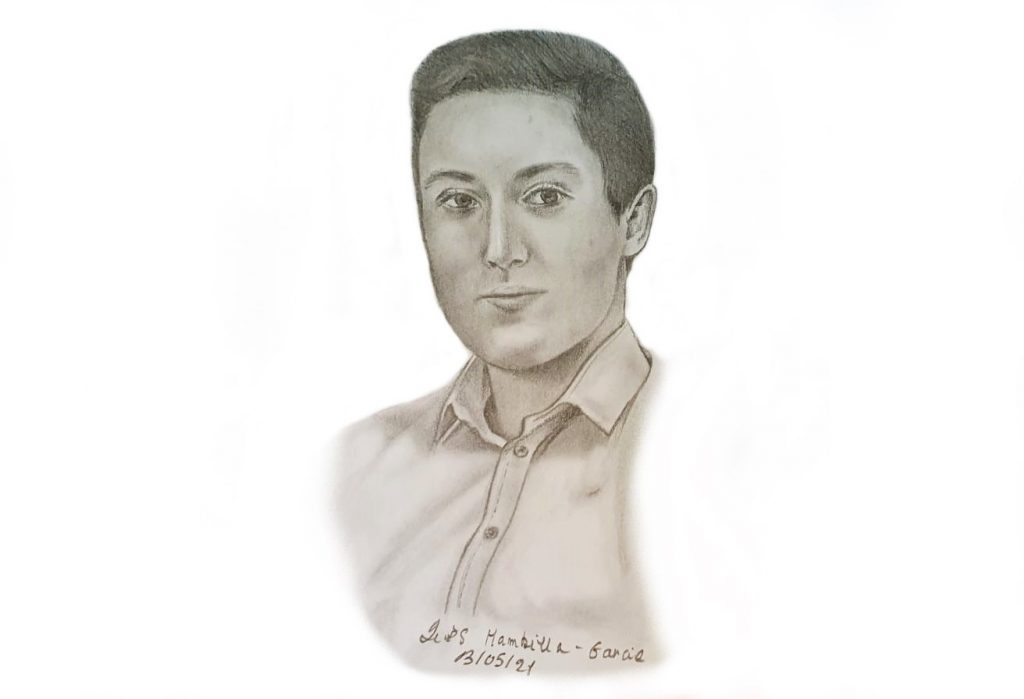