Sectors with most potential

Parallelly, we are now in a phase of economic recovery. It will be followed by a phase of economic expansion after economic readjustments will end around 2022, similarly to the 2009-2012 period. As a result, a lot of rotations have been done recently in favor of financials, industrials and tech particularly.

Oil and gas also show an interesting dynamic. Investments in gas and oil diminished of 30% in 2020, marking a continuity of the intense diminution of investments since the peak of 2014. Even if oil world demand will stay constant on long term, tensions on offer will systematically imply tensions on prices.

Rising interest rate: here is a signal for recovery. FED can’t maintain eternally interest rate of government bonds low with a growth overpassing 4% or 5% and an inflation surpassing 2%. From the summer 2020 until today, we observed a first phase of rising interest rate. Indeed, we observed a return of inflation (commodities, recovery, lost in productivity). In the next months we will probably enter in a second phase, with a diminution of central banks actions and government budgetary tensions.

First months of 2022 will probably imply a first return in the economic recovery. By this date, governments will try to reduce deficits while growth will slow. There is a risk – or a chance – for a mid-term correction of interest rate at that time. Statistically, it can impact stocks and other assets classes. Nevertheless, with a cheap money on a central scale, risks of a major correction are limited. After this intermediary phase in the economic cycle, we could observe an expansion phase, favorizing classical sectors in this context.

Stress is coming back?

Gold has confirmed its recent low. Even if real interest rate will continue to rise, we have a fundamental rebound with a return of investment demand (see market analysis). In the meantime, VIX index is touching a low at 16. Enter durably under this level could statically means a return of economic expansion, followed by new rapid return of economic risks. 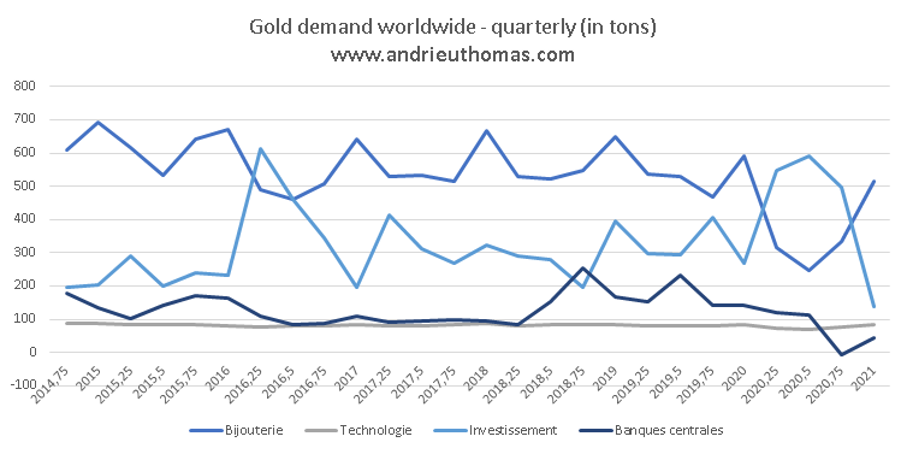 Furthermore, we observed on last weeks a stagnation of the US10Y and some monetary tensions. It can be a sign in favor of a market stress return for the beginning of the summer 2021. But once again, low interest rate limit considerably risks of a major correction on financial markets. Furthermore, the economic recovery is boosting fundamentally markets despite the manifestation of a revalorization phase for equities.

The beginning of the new economic cycle seems to be more intense and statically short before the next phase of economic slow. As a result, financial rotations should be quicker and more intense on this decade.

18.3%. It is the statistic advanced by China’s National Bureau of Statistics for the economic growth for the single first quarter of 2021. As a direct result, we have a massive economic distortion on a global scale. Europe needs 20 years to produce the same economic growth rate, when China is able to generate it in only three months.

Europe is going, more rapidly than expected, in the third plan of the international scene. A new world economic order is emerging. We are going into a more digitalized and more politically powerful economy. A wide part of western societies has crossed a new phase with governments actions. In France for example, reducing deficits will take between 12 and 15 years while public expenses achieved nearly 2/3 of the GDP in 2020. Before this date, there will another recession. In other words, states lost control of budgets, creating social and political tensions, and finally major changes. Inevitably, euro could continue to fall while dollar (index) stays low.

By Thomas ANDRIEU for ROCHEGRUP