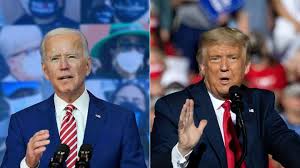 In preparation for any emergencies, including widespread social unrest following election results on Tuesday night, the National Guard has been deployed in several states.

And in Oregon, Gov. Kate Brown, for the second time in two months, declared a state of emergency for the Portland metro area, citing potential social unrest surrounding the election.

Governors have also mobilized Guard forces in Texas, Alabama, and Arizona to major cities in their respective states in anticipation of violence.

Last week, the Pennsylvania National Guard was deployed to the Philadelphia metro area amid a couple of nights of social unrest following the police killing of a black man. Guard troops have been since positioned to handle potential unrest come Tuesday night.

According to NBC sources, at the White House, beginning tomorrow, a « non-scalable » fence will be erected around the complex with 250 Guard troops on standby.

As of Monday afternoon, Guard troops have been spotted in several cities, preparing for Tuesday night.

Guard troops were spotted at a Best Buy in South Philadelphia.

Climate Tokens and The Never-Ending Squeeze

CYBERCRIME AND THE FINANCIAL SYSTEM