Authored by Samuel Haig via CoinTelegraph.com,

Recent data published by Chainalysis revealed a surprising first place for Ukraine in the Global Crypto Adoption Index 2020, followed by Russia and Venezuela. 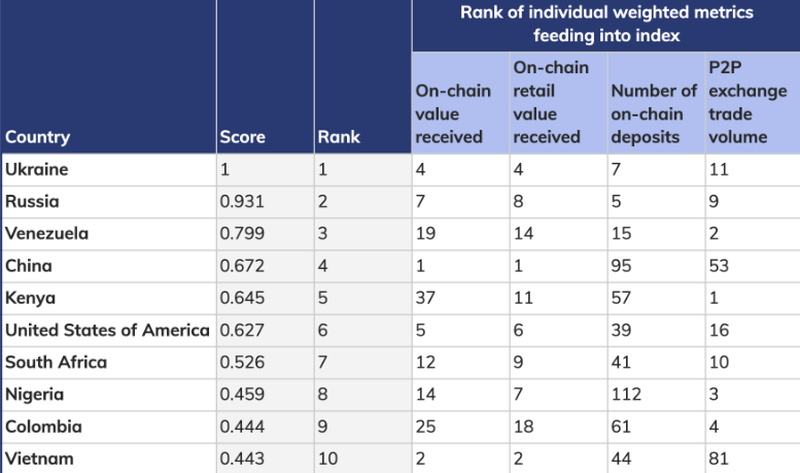 The report shows uneven levels of development across the crypto sectors of many nations, with the index’s per capita weighting ranking China poorly by number of on-chain deposits and P2P trade due to its large population — dragging the country down to fourth overall despite China dominating on-chain rankings by both retail and total value.

By contrast, the two top-performing nations by P2P exchange volume, Kenya and Venezuela, both rank in the top five overall despite failing to rank in the top ten by any other metric.

However, the emphasis on P2P volume may overlook the establishment of local regulated exchanges as an indicator of cryptocurrency adoption and skew the results in favor of developing countries that lack a robust financial sector, likely contributing to the United States ranking below Kenya despite outperforming the African nation in three of the four criteria.

Chainalysis describes Venezuela as an “excellent example” of the forces that drive cryptocurrency adoption within emerging countries, highlighting its use among ordinary Venezuelans as a means to mitigate economic instability:

Our data shows that Venezuelans use cryptocurrency more when the country’s native fiat currency is losing value to inflation, suggesting that Venezuelans turn to cryptocurrency to preserve savings they may otherwise lose. The report offers some unexpected insights, with Vietnam ranking second for the value of both retail and all on-chain transactions despite the local government’s early attempts to crack down on cryptocurrency.

No western European nations rank among Chainalysis’ list of the top ten countries by crypto adoption.